If you are facing a child custody case, an experienced child custody attorney can provide needed guidance and representation. In Nassau County, NY, and Queens, NY, David L. Martin, and Sofiya Shoaib, Esq. have the skills and resources to advocate for you throughout the child custody process. Our Nassau County child custody lawyer’s goals are to help ensure that your parental rights are protected while negotiating an arrangement in the best interests of the child.

New York courts will review your situation and will grant custody in accordance with what is in the best interests of the child. According to the statutes and the case law, multiple factors will be considered by the Courts when the Courts decide what is in the children’s best interest. These factors include the stability of either parent in providing a good home for the children, the parent's financial ability to care for the child’s needs, the custodial parents' willingness and ability to ensure that the children and the non-custodial parent have a meaningful relationship, etc.

The Courts will also consider who has been the primary caretaker of the children. For example, the parent who has fed, bathed, and played with the child, and the parent most responsible for getting the child to and from school may receive favorable treatment when the courts consider who is the child’s primary caretaker. Mental health is another factor the courts will consider. If one parent has been diagnosed with a mental health or substance abuse condition that could impact his or her ability to care for the children, the other parent may be considered more stable in caring for the child. The physical health of both parents may also be considered, and the parent best able to care for the child may be chosen for primary custody. The courts will also consider whether one parent has a history of abuse or neglect. The courts may look at the home lives of each parent and the finances of each parent to determine which parent has the most stable home and financial situation for the children. Finally, if the child is old enough, his or her preference in where he or she wants to live may also be considered.

If you need assistance with drafting a parenting plan and child custody agreement or need an experienced attorney to advocate for you, if you are contemplating or currently litigating these issues in Court, contact the Law Offices of David L. Martin, Esq., P.C. Our Nassau County child custody lawyers can assist you with negotiating a parenting plan that works best for your family and children. Contact us today at (516) 294-8886.

The court does not favor one parent over the other for custody issues. Rather, the court uses the “best interests of the child” standard. If you have questions about child custody, or parenting time issues, contact the child custody lawyers at Law Offices of David L. Martin, Esq., P.C today. Our lawyers can help you understand your rights, your options, and work with you to develop a child custody plan that can work for your family.

A custody agreement is a document that defines the legal relationship between the parents and the children. Child custody is preferably resolved between the parties without the involvement of the Court. If the parties cannot satisfactorily resolve the custody issue, the Court will intervene and make the decision. The Court does not favor one parent over the other for custody issues. Rather, the court uses the “best interests of the child” standard. Some other factors that the Court may consider include:

As the facts of each case differ, the Judge assigned to the case may rely more heavily on one factor as opposed to the other. That is why it can be difficult to predict the outcome of a child custody case brought in Court. While there are some circumstances where a child custody case should be litigated in Court, it is often best when parents can agree to a parenting plan outside of court with the assistance of their lawyers. Contact Law Offices of David L. Martin, Esq., P.C., child custody lawyers in Nassau County, New York today to learn more. 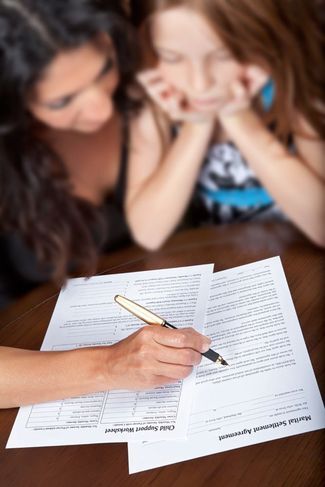 Child custody trials can be long and emotionally draining for all parties involved. It is imperative to have the guidance of a skilled and experienced attorney on your side. Our attorneys and staff will aggressively act in your best interests while handling every aspect of the legal process. When your family’s future hangs in the balance, it is important to have a child custody lawyer on your side that you can trust. Contact Law Offices of David L. Martin, Esq., P.C., child custody lawyers in Nassau County, New York today to learn more about how our legal services can help you.

Attorney for the Children

Parents should be aware that the Court also has the right to Order both parents to undergo a forensic evaluation, which is usually conducted by a psychiatrist or psychologist. The doctor's role is to examine each parent and pass onto the Court what that doctor has learned and what conclusions the doctor has drawn as to each parent. This information is to assist the Court in determining which custodial arrangement is in the best interest of the child.

We understand how important child custody arrangements are, and our Nassau County child custody attorneys will fight tirelessly for you during what can be a very difficult time. To learn more, please contact our office to schedule a consultation. Law Offices of David L. Martin, Esq., P.C., are here for you and your family.